Land and Expand – from Worst to First

Patricia Watkins is a sales growth expert and Managing Partner of M.O.R.E. SALES Advisors, an advisory group that works with companies who want to accelerate their sales results. She is also available for speaking; keynotes, seminars, and workshops.

Watkins has extensive experience as an SVP and VP of Sales, regionally, nationally, and globally, in both Silicon Valley startups and Fortune 500 companies, including HP, Teradata, AT&T, and NCR.

Patricia Watkins has built and led sales organizations from $0 to over $800 million in annual sales and transformed several sales teams from worst to first. 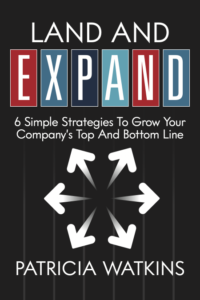 Here’s the secret, delighted customers buy more. I’ll never forget the day Dan called me. He had just been promoted to SVP of Worldwide Sales, but his biggest focus was on the United States. There were three teams in the United States and one of them was woefully behind quota. In fact, they hadn’t made quota for five years. But to make matters worse, the executives that he had worked with previously and knew he was a rockstar, wanted him to solve this problem by the end of the year. He had a very short window. That’s when he called me.

And he said, “Patty, I need you to get this team from worst place to just making quota. I don’t need worst at first, but can you take on this team?” And I looked at Dan and I said, “Five years, they haven’t made quota? Really? You realize this is going to be very hard. Are you willing to let me do whatever it takes to turn this around?” And he said, “Absolutely, whatever you need.” So I reluctantly took on the job to take this group from worst to making quota.

Well, the first things that I did is I started asking questions, what’s working? What’s not? I asked my peers, I asked my management, and I asked the team and I said, “What is it that we need to do better?” But the most important thing that I did is I talked to customers and I said, “What’s working? What’s not working?” But most important, “How can we better serve you?” And the feedback that we got back was horrible. It was not very good, they were not enthusiastic about the relationship.

So we went to our services group and said, “Hey, what are your top tickets? What are the top issues?” And they told us what they were. And collectively we worked together to address their concern, solve their problems. And the customer was delighted, “Wow, you guys care. And you got these things resolved faster than ever before.” We got their attention. And then we thought we’ve got to make sure they’re getting maximum value out of our products. Not just drop them off at the doorstep and run away.

The other thing that we did which was very important was, we listened to our customers. Other companies do customer satisfaction surveys once a year and then they file them away some place, we focused on listening to our customers every time we talk to them, what’s working? What’s not working? And how can we better serve you? And when they came up with issues in invoicing or billing or whatever it was, collectively we addressed their problems. And they were thrilled, “Wow, you guys really care.” They were delighted. They started buying more.

Fast forward, at the end of the year, based on Dan’s efforts, my efforts, but most importantly, the entire team, we met our quota. Not only did we meet our quota, we exceeded our quota. And even better than that, that team who had been cursed to be worst for five years, we went from worst to first. We were the number one team in the United States that year. And if you only leave with one nugget today on how to increase team performance, it’s this, delighted customers buy more.